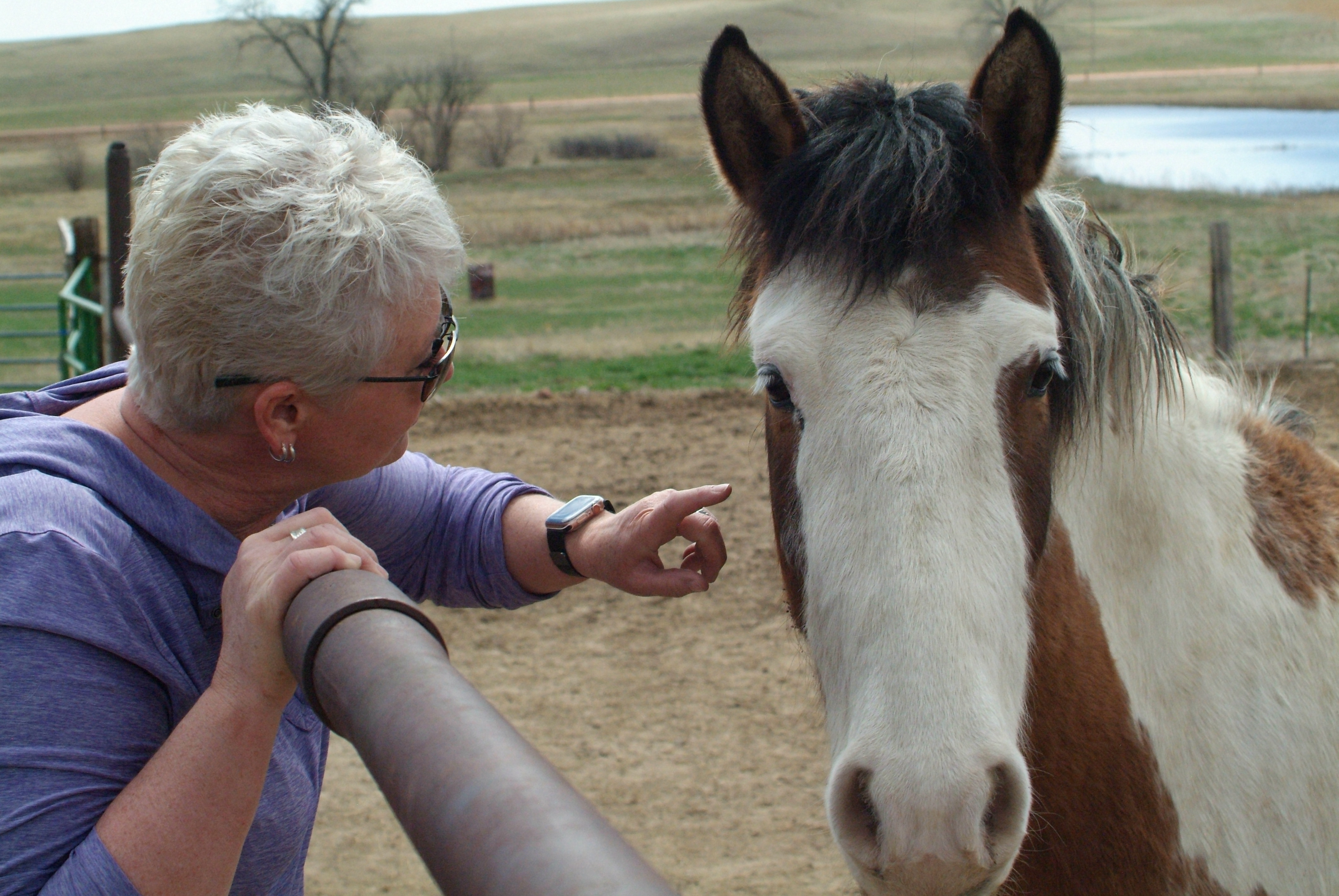 Lucia Roda shown here with Jezebel, a friendly pinto mare who was an orphan baby.

BUFFALO GAP - “I’m just the labor here,” Gulf War veteran Matthew Roda states with a smile, a chord-less screw-gun in one hand and a board in the other. “My wife’s the one in charge.”

“There are less than 1,000 of these horses left on the planet,” comments Lucia Roda on her 27 Spanish Mustangs at Windcross Conservancy – a Rare-Breed Preserve in Buffalo Gap. “These are remnants of horses that came over with Columbus.”

‘Lucia’, from the Latin word ‘lucius’, meaning ‘light’, is just that to her Spanish Mustangs, who are tame and like to be petted. “They are tough, hardy, 100 mile horses, whose predecessors were used by Pony Express and cowboys of the old west…quick and agile enough to deal with the dangers involved with rounding up Texas Longhorn in the big-thicket territory of the Texas panhandle and New Mexico…a registered breed, most around 14.2 hands tall.”

She uses them for among other things appointed tours – where trained guides do walking tours with individuals who can learn the history of the horses and also reach out, touch, feel, interact with them, which she has witnessed on occasion that interaction between her Spanish Mustangs and ‘special needs’/problem children and just children in general, has had a great affect…a special connection…therapeutic – a positive experience for both kids and adults.

Tours begin the second week in May, after Mothers Day, by appointment only. “We like to keep the groups small enough to make it possible for the direct interaction between individuals and horses. Night-time tours are also available where people can just watch the bringing in of the horses and feeding.” Call (605) 833-2336 to get more exact details and scheduling.

Lucia’s 20 year old daughter Gillian is studying Child Psychology at Northern State University, and helps out in the summer with the Preserve, as does18 year old daughter Shelby and 22 year old son Wyatt, who is a welder. The preserve also hosts national and international volunteers year-round, their present volunteer being from Boston.

“I’m so thankful for the local support…people have just been awesome.” Lucia thankfully adds.

Windcross Spanish Mustang Conservancy, a seven time Non-Profit award winner, will feature a Bed and Breakfast in June and library in the near future. They also have one of the largest DNA banks in the world of the Spanish Mustang breed.

Lucia also works at the V.A. in Hot Springs and Matt works at The Black Thunder Coal Mine in Wright Wyoming.

“This place is strictly a labor of love.”