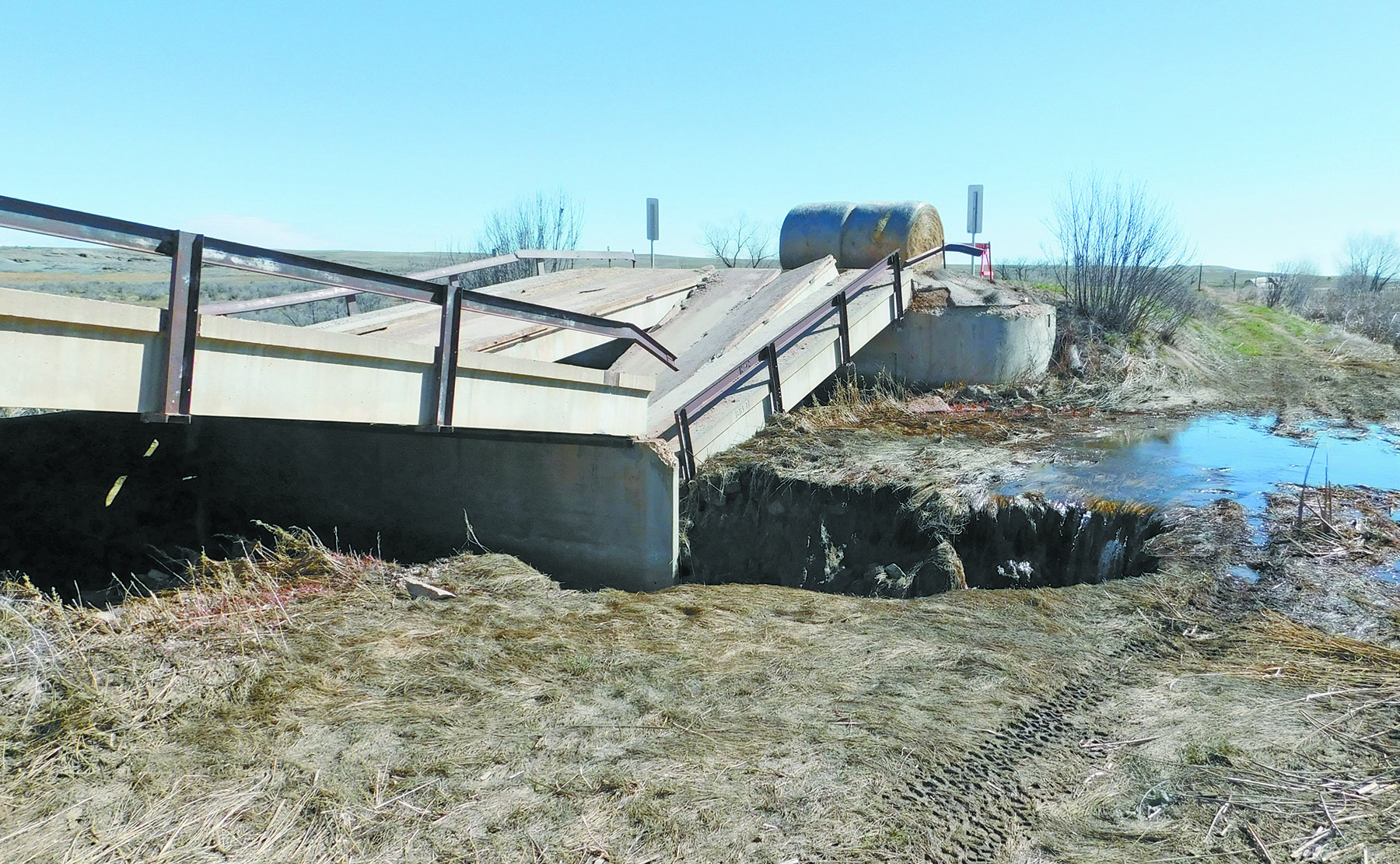 This bridge located on the east side of Ardmore collapsed this past weekend, presumably due to loosened footings and surrounding saturated grounds caused by last month’s Winter Storm Ulmer, according to Fall River County Emergency Manager Frank Maynard. Upon further inspection this past week, Highway Superintendent Randy Seiler said he suspects muskrats to have also played a role in the bridge's eventual demise, as their burroughing over time had weakened its foundation. The bridge represents the only crossing in that area of East Ardmore Road within 50 miles.

ARDMORE – A bridge on East Ardmore Road that was originally built in the 1930s, but then reconstructed in 1982, collapsed this past Saturday, April 6.

Located on the eastern edge of the town of Ardmore, the bridge expands over Long Branch Creek and represents the only crossing in that area for 50 miles, according to Fall River County Emergency Manager Frank Maynard.

Fall River County Commissioners called a special meeting for this past Tuesday, April 9, for them to approve a Disaster Declaration Resolution in an attempt to secure FEMA funding to replace the bridge.

At the meeting held earlier this week (but after the printed version of this week's Fall River County Herald was completed), it was announced by Commission Chair Joe Falkenburg and Highway Superintendent Randy Seiler, that a work around had been constructed in the area to allow temporary passage for motorists. But due to the expected winter weather this week, that passage would likely need ongoing upkeep.

Upon further review of the situation, Falkenburg and Seiler both said that they felt the bridge could be replaced with large box culverts, which is a quicker and much less expensive option than a full bridge replacement.

"I'm really pretty happy," Falkenburg said. "We thought it might be weeks or months."

Seiler said most of the old bridge had been removed by Monday and that work was continuing on Tuesday. He added that Steve Simunek had been hired for use of his excavator to move dirt and help create the roadway around.

Commissioner Joe Allen expressed his pleasure with how soon county crews were able to react and get it reopened after only three days.

Prior to the road being reopened, Maynard stated that the sudden collapse had created an emergency situation for residents of the area, as the road closure could add critical time heading east for first responders from the Ardmore Volunteer Fire Department, which is located on the western edge of town.  With no way of responding to calls east of town, Oelrichs, located about 50 minutes away, would need to take those calls instead, Maynard said.

Considering the amount of time it will take to fully replace the bridge, Maynard said options for a temporary fix had to be considered. One of the options that Maynard speculated could be accomplished would be to remove  the current structure as soon as possible and then install a large culvert, which now appears to be the route the county plans to take instead of replacing it.

Seiler said the cost of a temporary bridge to be placed there would have cost the county $13,000 to install, another $13,000 to eventually remove it, and the $2,600 for the first month's rent and then $1,000 for every month afterwards. He said the county could also purchase the bridge outright for $60,000.

Seiler also added that he suspected muskrats to be the cause of the old bridge's eventual demise, as their burroughing over time had weakened its foundation.