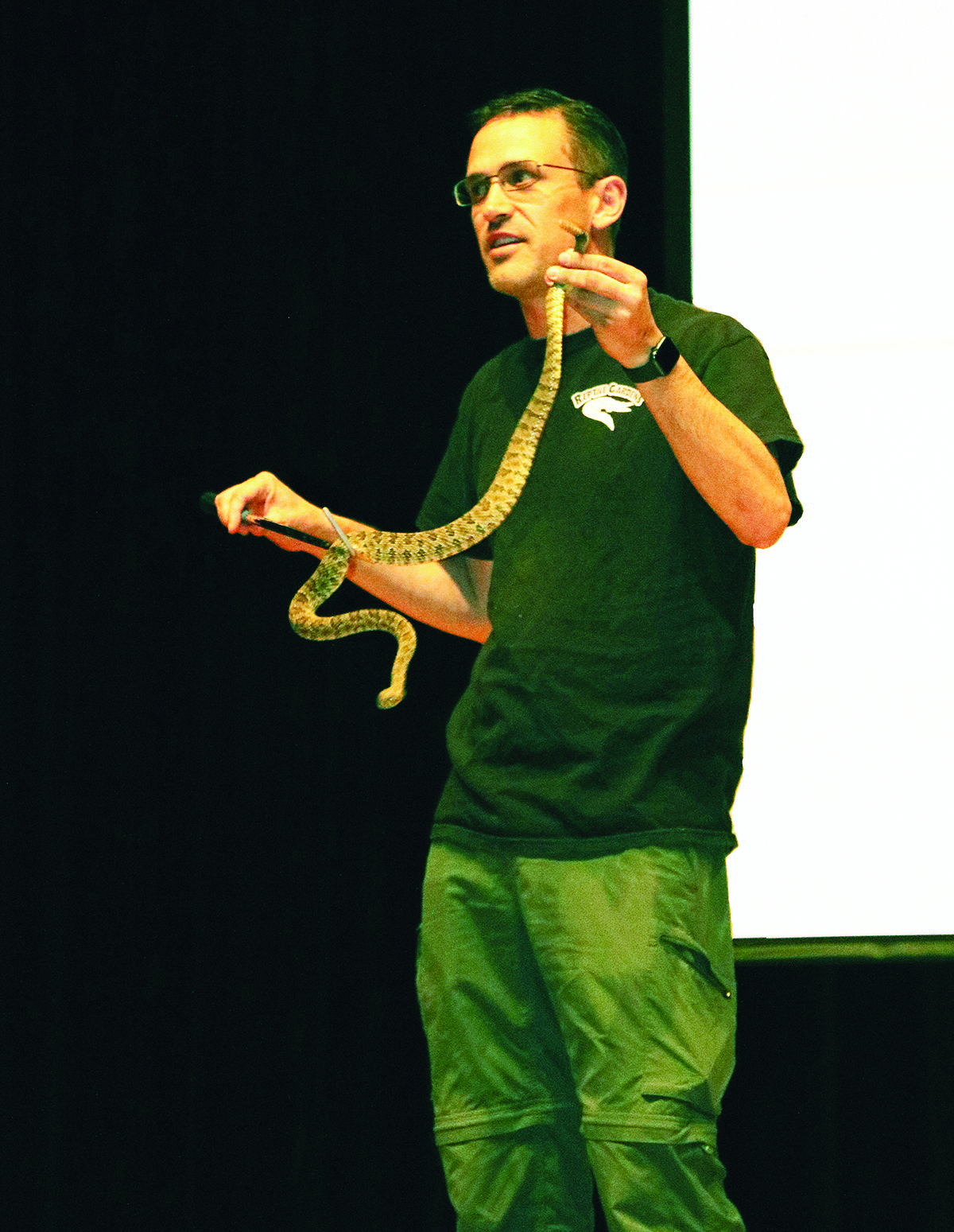 Terry Phillips with Reptile Gardens holds up a prairie rattlesnake while on stage last Friday night at the Mueller Civic Center in Hot Springs for a Snakebite Prevention & Treatment Seminar, hosted by Fall River Health Services.

Attendees of seminar educated about snakes and snakebites

HOT SPRINGS – For anyone living in Fall River County, who spends even just a little bit of time in the outdoors each year, eventually, there is a good chance that you are going to cross paths with a snake.

According to Terry Phillips with Reptile Gardens, there are 15 different species of snakes that inhabit the Black Hills, but only one is venomous – the prairie rattlesnake.

But despite the abundance of snakes in the Black Hills, and in the United States as a whole, reports of snake bites are actually fairly unusual, and fatalities from those bites are very rare.

Phillips, who was one of the presenters at a Snakebite Prevention & Treatment Seminar at the Mueller Civic Center last Friday night and hosted by Fall River Health Services (FRHS), said there are between 6,000 and 10,000 people that are treated for snake bites each year in the United States. Of that number, only about four or five people actually die from their wounds.

Up until recently, Philip said that it had been more than seven decades since someone in South Dakota had died from a venomous snake bite. He added that the two which had happened in the last year or so, were likely also due to other pre-existing health conditions which contributed to the fatal outcome.

The majority of the people who are bitten are males between the ages of 16 and 25 and typically suffer bites to their hands, arms, face and torso. Philip also added that, in many of the cases of young males getting bitten, alcohol was also a contributing factor.

In contrast, Philip stated, that the few women who are bitten by snakes each year, typically suffer their wounds to their feet, legs or backside.

Without needing to explain those statistics much further, it was fairly obvious to the large audience inside the Mueller Center’s theater, that the most effective method of preventing a snake bite was simply … don’t mess with it.

Tim Ripley, RN, Trauma Coordinator for FRHS, said one of the main reasons for hosting last week’s Snakebite Seminar was to help inform the public about prevention, with the overlying message to simply avoid contact with snakes. But in the event that you do run into a snake, stay calm and leave it alone.

If you have the unfortunate luck of getting bitten... again, stay calm and safely get to the hospital where the “anti-venom” drug called CroFab can be administered as soon as possible.

Over the course of the 90-minute presentation, all of the presenters – including Phillips, Ripley and Darby Cane from Texas and Jim Bussell from Rapid City – each repetitively dispelled many of the commonly believed treatments for snake bites, which were the “cut and suck” method, tourniquets, ice packs and even electrocution.

All speakers said that none of them work, and in most cases, they end up causing  more damage.

Bussell, who is a firefighter/paramedic with the Rapid City Fire Department, said one of the things that prairie rattler venom does to the body is breaks down fibrinogen which prevents clotting and can cause excessive bleeding. Many other symptoms include the break down of body tissue, swelling, breathing and heart rate issues, extreme pain, nausea and vomiting.

The top priority anytime anyone is bitten is to get them to the hospital, Bissell said. He recommended they call 911 so that paramedics can arrive and begin treating symptoms, but if there is someone available to drive a victim straight to the hospital, that is acceptable as well.

Ripley said Fall River Health Services carries four viles on-hand of the highly effective anti-venom drug Cro-Fab. He said they will usually begin administering the drug immediately, as long as the victim is exhibiting symptoms of the bite. Oftentimes, however, a victim may have received what is called a “dry bite” where there are signs of a bite, but because there may not have been any venom injected, there are no other symptoms.

In this case, the victim is monitored for at least eight hours, and then released if no other symptoms appears. Ripley however gave an example of how a young girl once entered his E/R and had a scratch from a snake fang, and did not show any other symptoms for several hours. However, just before the monitoring window closed, the fang scratch began to swell up and other symptoms followed.

Ripley said patients receiving Cro-Fab will likely receive all that is available in Hot Springs for the initial treatment, but then they will be transferred as soon as possible to Rapid City Regional, by either ambulance or Life Flight helicopter, depending the severity of the bite and the weather conditions for transport.

Dr. Barry Bender, with Fall River Health Services and the Hot Springs Ambulance Service, who was not one of the speakers but available in the Mueller Center lobby to visit with attendees, stated that each vile of Cro-Fab costs about $3,000, and that oftentimes, a victim will receive up to 10 viles.

While expensive, Ripley said during his presentation that the drug was highly effective, and gave an example of how he had treated a rattlesnake bite that had occurred on a man’s thumb. When the man had entered the ER, his thumb was extremely swollen and completely black – so much so that Ripley believed that he would likely have to have it amputated. However, three days later, Ripley said, his thumb was back to normal and that there were only two small dots visible from the fang bite.

Cane, the sales rep for the company which produces Cro-Fab, said the drug is created collecting venom from all of North America’s venomous snakes, which is then injected into sheep found in Australia. The sheep then produce antibodies which are used in the creation of the synthetic drug.

How the drug works, Cane said, is that is binds with the venom found in a bite victim’s blood, and then, for the lack of a better term, “Its then just peed out.”

In addition to remaining calm and seeking immediate medical attention at the closest hospital, Ripley said other things a bite victim can do is drink fluids (but not alcohol or caffeine), remove or loosen any tight clothing and also take off jewelry like rings, which may become very tight due to swelling and need to be cut off in order to be removed later.