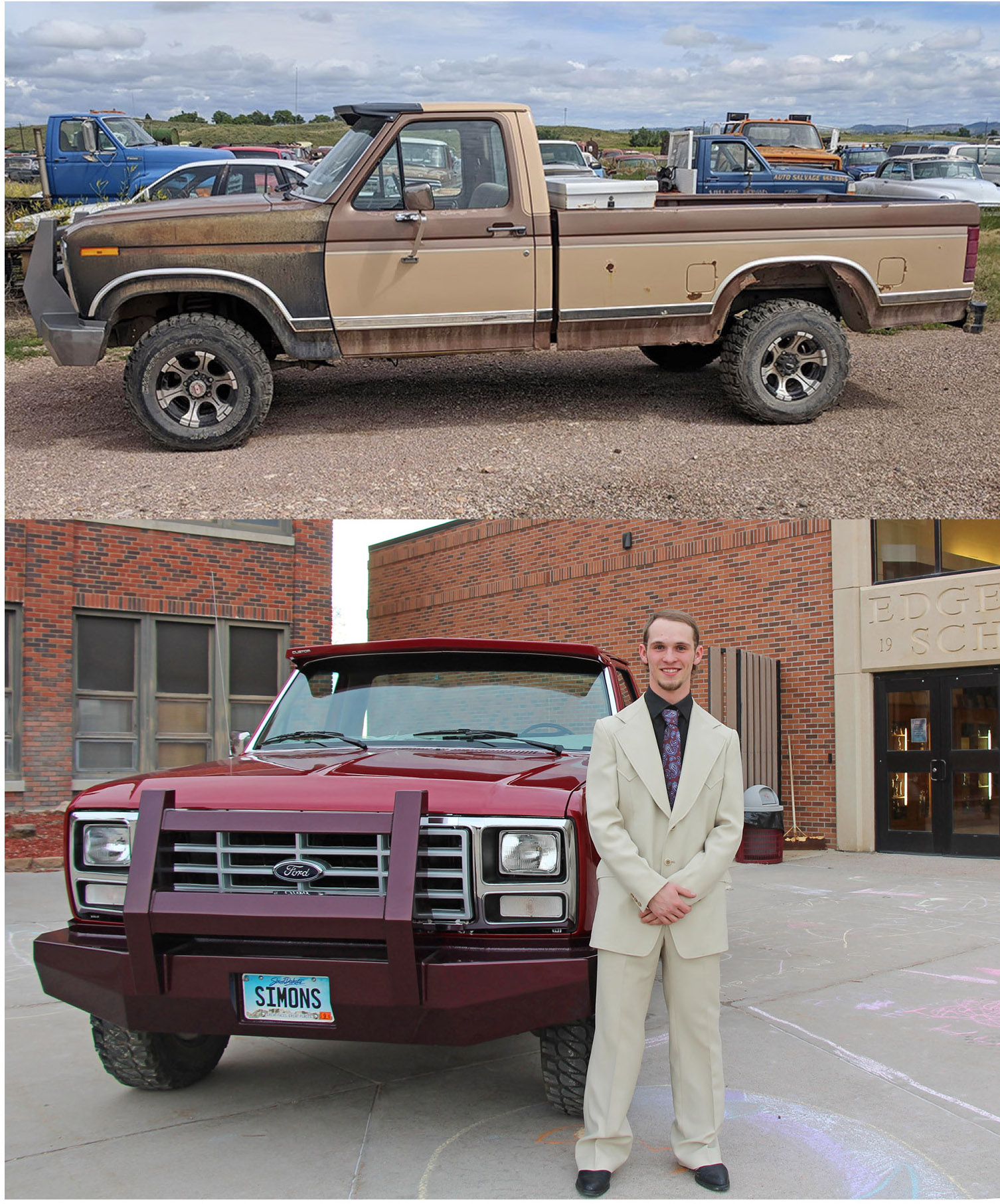 Ryan Simons stands next to 1985 Ford F-150 that he rebuilt for his senior project (Photo by Rhea Falig/Fall River County Herald).

The top photo is how the pickup looked prior to Ryan putting his hard work and skill into the project.

EDGEMONT— When given the task of completing a final senior project before graduation, Edgemont seniors not only accepted the challenge but went above and beyond expectations. From rebuilding a truck to organizing a blood drive, students not only picked projects that were of interest to them, but also a benefit to the community they live in. Would we expect anything less from such exemplary students?

One senior for example, 18-year-old Ryan Simons rebuilt a 1985 Ford F-150 for his Senior Project, which was on display, along with his classmates’, April 1 at the 2nd Annual Edgemont Art Fair.

Simons spent six months rebuilding the truck and says he learned a lot about the autobody process. He said he chose the project because of his love for working on cars and trucks.

The senior who plans to attend school at Lake Area Technical Institute in Watertown is planning on studying automotive technology.

Also helping Simons on the project was his father Sam Simons and Mentor Benny Hatch.

During the truck overhaul Simons said they faced the challenge of fixing all of the rust and repairing all of the dents in the vehicle. The cost was roughly $5,000 to complete.

Simons said his favorite experience was getting to shoot the paint for the first time and getting to see all of his hard work come to life.”

When asked if he plans on selling the vehicle he said definitely not. “There is a lot of sentimental value in this pickup.”

Some of the other senior projects that were presented last week included:

• Lacette Klein, who put in over 100 hours toward becoming a certified nursing assistant and will complete the goal in a few weeks.

• Emily Moore raised over $300 for Battle Mountain Humane Society by making cat and dog treats. She said she enjoyed it so much she hopes to continue volunteering. Moore plans on going into criminal justice after school.

• Kaleb Darrow spent a total of 28 hours building a long bow out of osage wood for his Senior Project.

• Maddie Peterson organized a fund raiser for the delta dental bus that comes to Edgemont once every two years.

• Dylan Urban learned how to play a six string guitar in four months. The senior had a recital he performed for the school on March 20.

• Dalton Reutter built a 224 Valkrie for his senior project.

• Abby Tidball held three separate blood drives in November, December, and March. The senior said that she was afraid to give blood and now she’s not. In those three events alone, they were able to collect a combined total of 83 units which can save 249 lives. Tidball plans on going into the medical field after graduation.