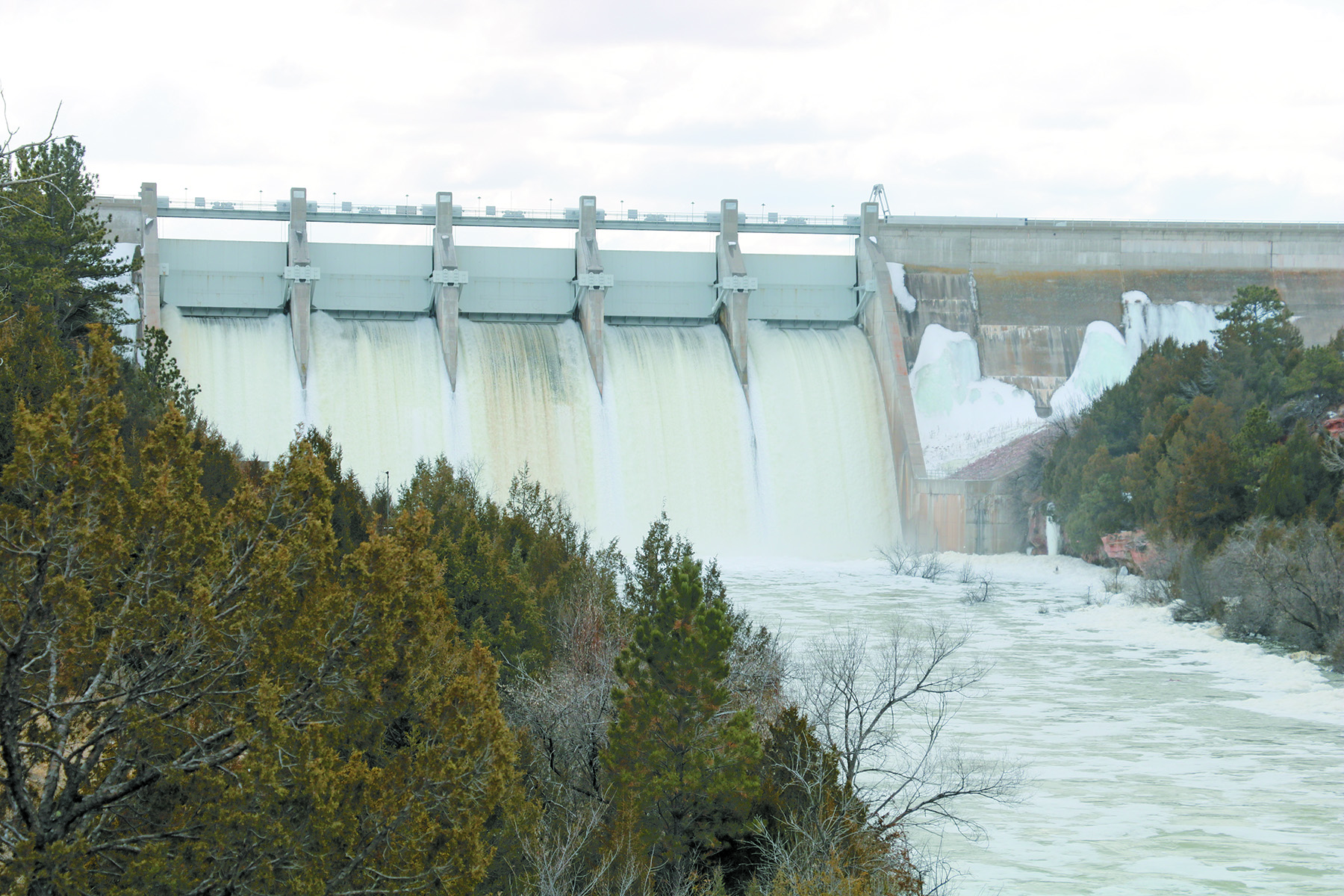 A view of the Angostura Dam from a few hundred yards downstream of the Cheyenne River last Tuesday, March 19, when it was releasing 5,500 cfs to keep up with increasing inflows from the south.

HOT SPRINGS – Due to heavy inflows of water into Angostura Reservoir, the dam earlier this month began releasing 1,500 cfs of water on March 15 which increased to 5,500 cfs by Tuesday, March 19.

Needing to keep up with the ever-increasing inflows from the Hat Creek, Horsehead and the Cheyenne Rivers, the reservoir’s outflows peaked at 9,500 cfs last Friday, March 22, according to Mick Jenniges with the Angostura Irrigation District.

As of this past Monday, March 25, Jenniges said decreasing inflows over the weekend had allowed them decrease outflows to 6,500 cfs, and he expected to likely being able to completely shut the gates on the dam by midweek.

Jenniges said they do not like to have to let water out of the reservoir due to the havoc is causes downstream, and likely adding to the problems ranchers are already facing. But without a spillway or some other means of releasing water, they don’t have a choice, he said.

Last year, Angostura Reservoir found themselves in a similar situation and were faced with the need to release water as well. The difference however is that it was much later in the spring and due to heavy spring rains and runoff from further upstream.

The most water at any one time they were releasing through the gates last year was 4,570 cfs, which took place on June 2, 2018 – less than half the amount that was being released over the weekend.

While 9,500 cfs may seem like a lot of water being sent downstream and possibly contribute to other flooding issues elsewhere along the Cheyenne, this spring’s release is still far from the 20,600 cfs that Angostura was forced to release on June 8, 2015, Jenniges said.

The water issues being experienced at Angostura Reservoir this spring are just one of the many symptoms of Winter Storm Ulmer that dumped nearly two feet of snow just over the border in Nebraska and set numerous snow, rain and wind records through many parts of the Midwest on March 13-14. Catastrophic flooding issues are ongoing in many parts of Nebraska and also as close as nearby Oglala Lakota County.

In Fall River County, Emergency Manager Frank Maynard said the areas currently seeing the most amounts of flooding is in the southern half of the county from Oelrichs to Nebraska, and also east to west. He said Horsehead Creek had swelled out of the banks and come within 10 inches of overtaking Hwy. 18.

Early last week, extensive flooding was also reported north of Hot Springs up Hot Brook Canyon where the river had crested and crossed the pavement in some areas.

Maynard said a number of gravel roads in the souther part of the county – like Black Banks Road, Sunnybrook and Hard Scrabble Road – were closed as of Monday due water covering them in low areas.

Water levels however had gone down on their own by Monday, and he felt the area had likely experienced the worst of it at this point. Maynard however warned that if the winter storm that is forecasted to hit the area later this week dumps any significant amounts of precipitation, we could be back in the same situation quickly.