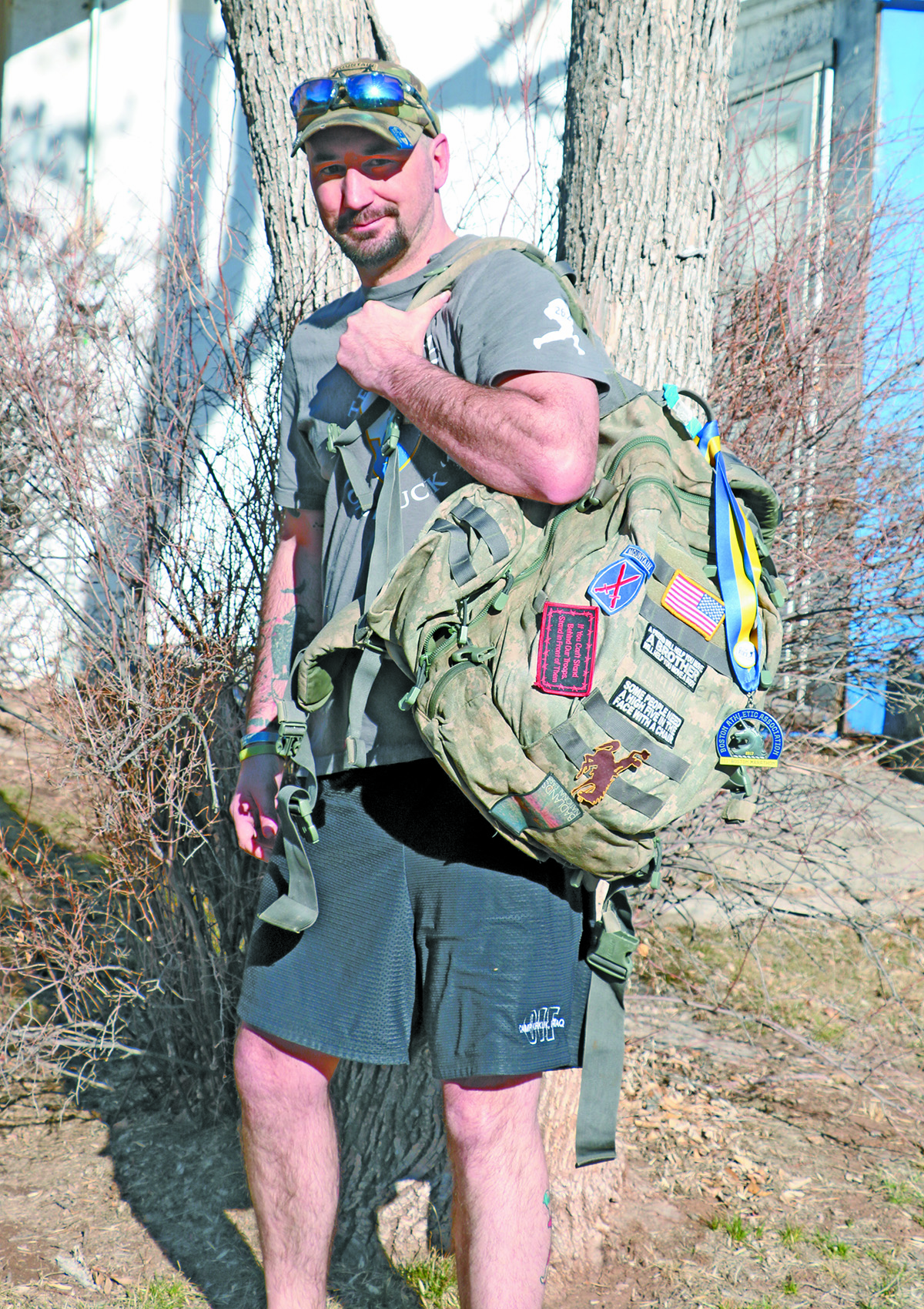 J.R. Schaffner, 38, holds his Army rucksack which he will carry next month, while weighted down with 35 pounds, during his third annual 26.2 mile Tough Ruck competition.

A few years ago, he was approached by one of his brothers from the 2/22 and told about an event that takes place each year as part of the Boston Marathon called the Tough Ruck, which is a group of military and civilians whose sole purpose is to “Ruck” in honor and in memory of Fallen Service Members, Police, Firefighters and EMTs, while raising funds to support military families in times of need.

At the time of that conversation, Schaffner said he and his military brother were both intrigued by the idea of participating. Not only because they were each “old grunts who missed the suck,” as he put it, but also because they had recently lost one of their fellow 2/22 Infantry brothers to suicide in 2015.

Schaffner recalled how the family of his lost military brother not only had to endure the emotional loss, but also the financial loss and were forced to create their own GoFundMe to make ends meet.

Sadly, since 2015, Schaffner said he has now lost four more brothers from the 2/22 Infantry to suicide.

As a way to help those families in need, and also honor the memories of those they lost, Schaffner and 15 others from the 2/22 formed a “Tough Ruck” team and participated for the first time in 2017.

Next month, on Sunday, April 14, Schaffner will once again strap on his rucksack and compete for the third time, but now as one of an ever-growing 45-member Team 2/22 Infantry.

For non-military or those unfamiliar with the term, “ruck” can be defined by simply walking around with a backpack on a hike or as difficult as moving fast with all your military gear, loaded for bear, over rugged terrain, infiltrating to your objective.

The “Tough Ruck” in Boston is all of the above and done so on a marathon-certified course of 26.2 miles in Concord, Mass., taking place on historic land that was the site of the Minuteman Battle of the Revolutionary War. Limited to 1,000 bibs, participants can compete as an individual or as part of a team, all while each tote 35 pounds in a ruck sack strapped to their back.

On April 15, 2013, during the first-ever Tough Ruck, event participants were at the finish line of the Boston Marathon and joined the first responders to help those that were injured by the horrific blasts that year.

Success in the “Tough Ruck” is measured in a number of ways, and for Schaffner and his 2/22 teammates, they’re some of the best “Ruckers” around.

When it comes to raising funds for the Military Friends Foundation – which offers grant programs and more in support of families who have faced hardships related to military service – Team 2/22 Infantry has been the event’s top-fundraiser for three years in a row and currently has more than $60,000 raised for the event. While an impressive amount, Schaffner said their team’s goal is $100,000, so there is still a ways to go.

As individual fundraisers, members of Team 2/22 Infantry took the top-three spots last year and will likely do so again this year, Schaffner said.

In the Tough Ruck race itself, members of Team 2/22 Infantry have also consistently been some of the first to cross the finish line as well.

Highly competitive himself, Schaffner said he has finished in the top-15 before and has his sights set on taking the top spot someday.

Married for the past nine years to his wife Julie, who works for the Department of Social Services in Hot Springs, the couple has two children – a son Nick, age 9, and a daughter Zoe, age 5.

Originally from Pennsylvania, J.R said they moved to Hot Springs a couple of years ago and visiting the Southern Black Hills while on vacation and then “falling in love with the place.”

He is currently a full-time student and travels back-and-forth daily to Chadron State College while earning a degree in Psychology, with the goal of one day being a recreational therapist in the PTSD program at the Hot Springs VA.

In past years, J.R said his family has traveled with him to Boston and watched him compete in the Tough Ruck, but is unable to come along this year, a fact which he said is unfortunate, because seeing your family along the course had always provided him an extra boost of energy.

The race itself is both physically and mentally draining, he said.

“Its a very humbling experience,” Schaffner said, while describing how one’s state of mind deteriorates the longer you’re on the course.

“By Mile 25 you’re thinking, ‘why can’t it just end now instead of going 1.2 miles further,’ but you gotta just dig,” he added. “It really shows who you are and what your body can do. You’ve got to just remind yourself who you’re doing it for. It’s not just for me.”

Schaffner said he credits Kim Moir at Bodies In Motion of Hot Springs for helping get in shape for the competition – through both physical workouts and for her guidance in nutrition in leading up the event.

To help with Schaffner’s fundraising goals, the public is asked to go online to www.toughruck.org and click on the “REGISTER” button in the upper right corner of the screen. Once there, you can click on the “DONATE” button, select “Team 2/22 Infantry” and team member “Jr. Schaffner” from the drop down menu.