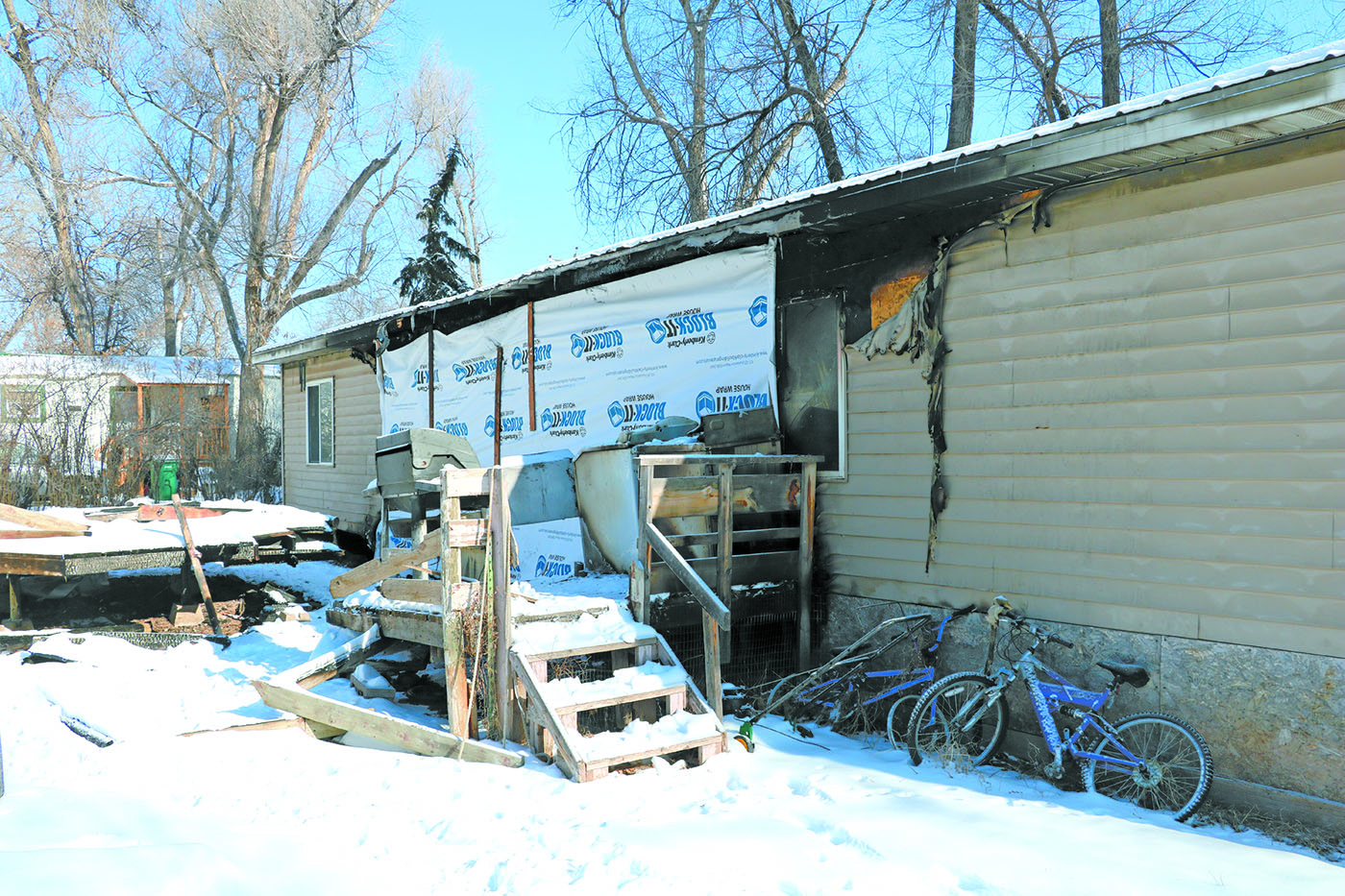 HOT SPRINGS – While getting ready for bed at about 10 p.m. last Wednesday night, Feb. 13, Aaron Comstock said his wife Bobbie told him and their two children, Hope and Aiden, that she thought she was hearing hail hitting the top of their home at 1121 S. 4th Street in Hot Springs.

To investigate the sound she described, Aaron said he opened the front door of their double-wide trailer to the horrific scene of their front porch completely ablaze from a fire that he described as being as hot and bright as the sun.

Aaron said he quickly yelled at his family to get out of the house, while scrambling to grab whatever he could on the way out the door. One of the things close by, he said, was an Xbox One which his 11-year-old son cherished, so he quickly grabbed it and put into his son Aiden’s arms.

As flames began to penetrate the front wall of their home, the family quickly headed to the rear of their trailer and exited out a back door.

Once outside, Aaron recalled seeing something white in his son’s arms as they made their panicked escape. He momentarily made the incorrect assumption that it was their Chihuahua puppy named Baby Blue, but soon realized however that it was the Xbox that he had hastily grabbed and put in Aiden’s arms instead.

Aaron said he then ran quickly back around to the rear of the home to look for their dog, but had forgotten about the clothesline, which caught him painfully across the cheek and neck area as he ran. However, once he reached the back door and reentered their home, he found and secured a scared, but unharmed, Baby Blue cowering next to a chair.

Hot Springs Volunteer Fire Department crews arrived soon afterwards and were able to put out the fire and contain it primarily only to the porch. While the structure itself still stands, Fire Chief Dar Coy said it is considered a total loss due to the amount of smoke and heat damage sustained to the rest of the home.

Despite the family’s dog making it out of the house with the family, their two cats however did not make it and were found the next day to have died from smoke inhalation. Miraculously, Aaron’s pet leopard-tail gecko survived while in the safe confines of its aquarium.

Coy said the cause of the fire is being listed as undetermined.

Aaron, however, is assuming it was due to him not fully extinguishing their firepit that he had been using earlier in the evening. Despite most of the deck and surrounding items being wet and/or covered with snow, and the firepit appearing to be cold before going inside, Comstock thinks there must have been some embers still warm that got disturbed by the wind and then ignited something dry on the porch.

Its a tragic event that Aaron said he is taking full responsibility for, if that is what truly happened. But overall after the incident, he said he is more thankful than anything. Not only for the fact that he and his family survived, but also for the overwhelming support they’ve received thus far from the community.

The support has come from not only people they know, but also from complete strangers who have offered a variety of things, including warm meals, clothes and other essential items.

Aaaron – who is also known as “Red” by his customers that are familiar with his always-positive outlook and smiling face at the Taco John’s cash register – said his employer Jacki Lockwood has been extremely supportive during their difficult past week.

Likewise, Bobbie, who has part-time jobs at both KOA Kampground and Evans Plunge, said both of her employers have also been extremely helpful.

KOA owners Todd and Suzanne Givler have been very generous in allowing their family to stay in a pair of cabins at their campground until more permanent housing can be found. Plunge manager Kris Hanson has also been instrumental in directing donations and helping them find a new place to live as well.

Both also said the they owe a great deal of gratitude to the Hot Springs Police Department for their care and assistance the night of the fire. “They’re a true blessing,” said Aaron.

Aaron also spoke very highly of their landlords Cody and Crystal Lockhart, who he said are determined to find a way to demo and refurbish the trailer and make it livable for them once again.

“Cody is one of the most positive and inspirational people I know,” Aaron said.

A fundraising effort for the family has been started on the Facebook site “CHAT ROOM: Fall River County SD” which lists several items that are needed by the family, including clothing, toiletries, food and gift cards or cash. Once the family does find permanent housing, they will then also be in need of pillows, blankets, beds and furniture.