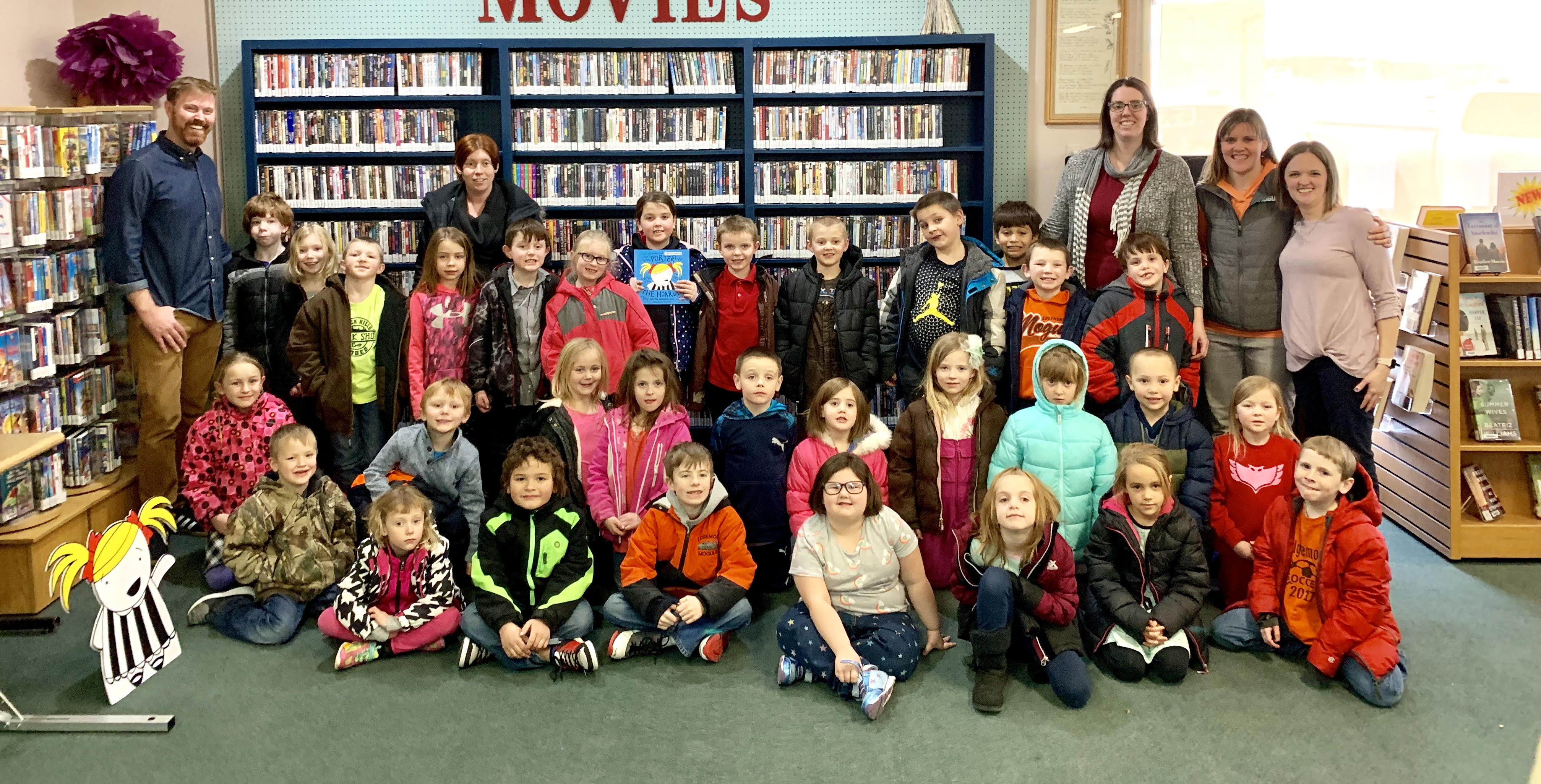 The primary students each received a copy of Porter the Hoarder in partnership with author and Edgemont native Sean Covel (far left), United Way, and Black Hills Reads. (Photo by Savanna Simmons)

EDGEMONT – When young, mulleted Sean Covel sat in his Edgemont High School algebra class, the main grounds for his 1.5 GPA, he dreamed of growing up to be a story-teller, though he didn’t think it would actually happen. The idea originally derived from Covel’s fifth grade teacher, Chuck Littel, who circled the classroom telling each student what he predicted their future entailed. He told Covel that he saw him being an adventurer, then returning to tell his stories, and while Covel didn’t quite see that then, it’s what he has ended up doing.

Covel returned to his hometown of Edgemont last Tuesday, Feb. 12, to share his book “Porter the Hoarder & the Ransacked Room” with the primary class and community members at the Edgemont Public Library.

“The students were excited to see an author in person. It was extra special to have that author be a person that grew up in Edgemont. It shows them that they can do anything and go anywhere their dreams take them,” said primary teacher Pam Koller.

Porter, a messy, young girl who loves all sorts of gems, including lightning-fried lizards and two moldy sandwiches, encourages families to read together and decide what stays and what goes. The effort to connect little members of the family with big stems from a cooperation with United Way and Black Hills Reads, organizations that feel quite passionately about early childhood connections and literacy.

“We are so grateful that Sean could come to our library to share his time and talents,” said Edgemont Public Library director Samantha Miller. “The kids loved reading ‘Porter the Hoarder’ with Sean and helping him find all the hidden objects. Working together with the school to bring the primary class to the library was fun and something I hope we can continue to do.”

Covel was launched on the producer scene in a big way with the 2004 comedy Napoleon Dynamite that snagged four Teen’s Choice Awards, including best comedy. The zany, quirky characters of Napoleon could welcome funny, little blonde Porter and her love of junk right into their film nearly seamlessly. Vote for Porter? Perhaps Covel could insert a tot-eating llama named Tina (whose real name is Dali Llama, Covel said) in one of the 64 Porter books that will eventually be released.

“The thing that I appreciate about my career as a producer is that I gained the skills to take an idea and turn it into something real. That’s what has been great about Porter,” Covel said. “I didn’t design the character. The name ‘Porter the Hoarder’ and the image that is ‘Porter the Hoarder’ came from Rebecca Swift, who is the illustrator, but the second I saw her, suddenly I knew what her voice was going to be like. I knew it would be fun to do a look-and-find book. Most importantly, I knew how to say, ‘Ok, let’s do it. Let’s make it for real.’”

“Porter the Hoarder & the Ransacked Room” was released at the first of the year, and 2,000 copies of Porter were gifted to first graders throughout the Black Hills thanks to United Way and Black Hills Reads.

“I want to say a big thank you to Black Hills Reads, a division of the United Way of the Black Hills, for providing free books for all of the children who attended the reading. Sean even took the time to sign each book for the kids,” Miller said. “We had a great time with Sean and can’t wait until his next book comes out so we can do it again !”

This fall, each first grade student across the state will also get to take home Porter at the same time Covel rolls out the second of the series, “Porter the Hoarder, the Nature Explorer”, in which Porter, in search of flatulent flying fish and fossilized deer dookey, may return home with only one wagon load of hoarder finds.

True to the state where the author and illustrator grew up and reside, Porter will also visit Sturgis Bike Rally, where Covel joked that young readers can help her find 3.2 million Bud Light cans. In another Porter book, one that Covel said he is really excited about, Porter’s parents tire of her constant hoarding and blow all of her treasures into space where she has to venture to retrieve them.

Covel speaks about his partner Porter and her love of candy-covered eyeball kabobs with such fervor that it’s easy to see how he could dream up 64 children’s books and at least one young readers chapter book, “Marlon McDoogle’s Magical Night” set aboard the Hill City’s iconic 1880s train, that will be released at Christmas this year.

“I feel like there’s a pivot happening in my life right now, and it’s a change from being a producer, which is to find a story, shape it, and transact it, to being a writer and creator, create a story and make that story happen. That’s what Porter is,” Covel said, thinking back to Mr. Littel’s fifth grade predictions. “At the time, I thought, ‘I don’t want to swing from vines’, but then every time I come into an opportunity in my life, I think, I got permission to go have adventures and permission to tell stories.”

“Porter the Hoarder” is available at www.porterthehoarder.com and on Amazon, where, luckily, Covel said, they have yet to “run into people who are mean.”