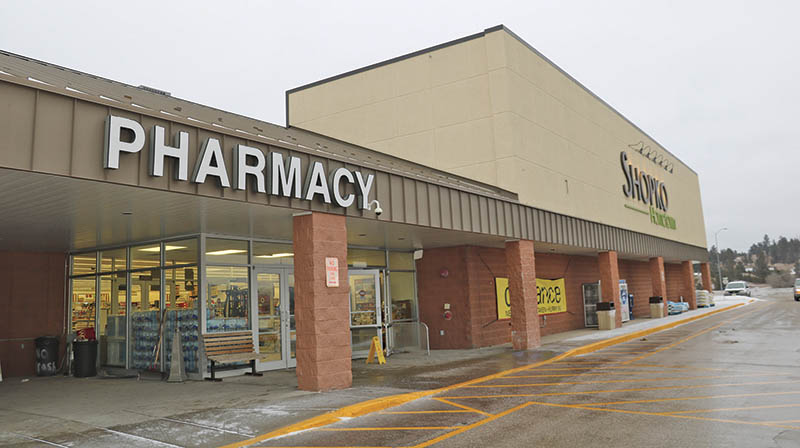 PHOTO CUTLINE: Shopko announced last week, that as part of their Chapter 11 Bankruptcy filing, they will be auctioning off their pharmacy records, and in effect, no longer offering pharmacy services through their Hot Springs retail store. (Photo by Brett Nachtigall/Fall River County Herald)

HOT SPRINGS – While it certainly wasn’t good news for Hot Springs and the surrounding area, it could have been worse.

Earlier this month, the regional general merchandise store Shopko announced it was closing more than 60 of its stores, and last week, added nearly 40 more to the list as they announced the company has filed voluntary petitions for a court-supervised financial restructuring under Chapter 11 of the United States Bankruptcy Code.

According to a press release sent out on Jan. 16, Shopko is seeking to facilitate the restructuring as a result of excess debt and ongoing competitive pressures. During the restructuring process, Shopko will continue to operate and serve its customers, vendors, partners and employees, the release stated.

A total of 105 retail stores in 21 different states are slated to close, including seven in South Dakota with the nearby Custer store as one of them. Others on the list include Redfield, Wagner, Webster, Dell Rapids and two in Sioux Falls.

While local rumors had Hot Springs’ retail store as one of the planned closures, those concerns were put to rest last week to not be true at this time. However, it was announced that Hot Springs’ Shopko Pharmacy files would be auctioned off and that its in-store location would most likely be sliding the doors shut on its counter.

Michelle Hansen, a Shopko Public Relations spokesperson, said in an email on Friday, Jan. 18 that, “As part of the Chapter 11 process, we have made the difficult decision to exit our pharmacy business.”

“Starting possibly next week, we will be selling our remaining pharmacies through a court-supervised auction process. Leading into that process, our pharmacies will remain open and committed to serving our customers with the same high-quality goods and services that they expect,” Hansen stated last week.

As of Monday, Jan. 21, the Hot Springs Shopko Pharmacy was not officially listed on the company’s website as one of the pharmacy store closings, but that list is expected to be updated by next week after the auction process.

“The timing of a pharmacy closing depends on when the buyer will take over the prescription files,” Hansen said. “In addition, Shopko is entering into an auction to sell the remaining pharmacy business. We cannot be certain how long this process will take, but we will continue to keep the restructuring website updated with further updates about pharmacy sales.”

Hansen said Shopko will notify all of their pharmacy customers by U.S. Mail to announce when their pharmacy will close and to where their prescriptions have been transferred.

Hot Springs Shopko Pharmacy Manager Sara Butts said her understanding was that they would continue to operate as normal as possible until the end of this week and that the auction would likely take place by Saturday, Jan. 26, with more information to be announced by Tuesday, Jan. 29, after its completed

Butts said that in some of the company’s other stores around the country, larger pharmacy companies like Walgreens and CVS had already taken over the closed Shopko Pharmacy locations, but she did not expect to see that same thing happen in Hot Springs. She said the pharmacy files would be auctioned off, but having another company come in and operate the pharmacy business under the same Shopko roof seemed unlikely.

Butts, who is an Oral native and has been working at the Hot Springs Shopko for the past year-and-a-half, said she had already been offered a part-time position at the Lynn’s Dakotamart Pharmacy in Hot Springs and was going to start there on Wednesday, Jan. 23, while also working simultaneously at the Shopko Pharmacy.

She said there are a total of six employees (three full-time and three part-time) at the Shopko Pharmacy and all were currently seeking other employment.

Lynn’s Dakotamart Pharmacy is the only other privately-owned pharmacy currently operating in Hot Springs. Other government-operated pharmacies include the ones at the Hot Springs VA and State Veterans Home.

Pharmacist Kimberly Ammerman, the director of all Lynn’s Dakotamart Pharmacies, said they are taking steps to help pharmacy customers dealing with changes.

“We are happy to help the individuals affected by the changes to make it a smooth transition,” Ammerman said. “We care about the community and will do our best to make the transition as easy as possible.”

She said that individuals can simply call the Hot Springs Lynn’s Dakotamart at 605-745-3110 to let them know if they’d like to switch their records to them. “We can take care of everything else,” she said, adding that Marie Langfeldt is the Pharmacist in charge at the Hot Springs store.