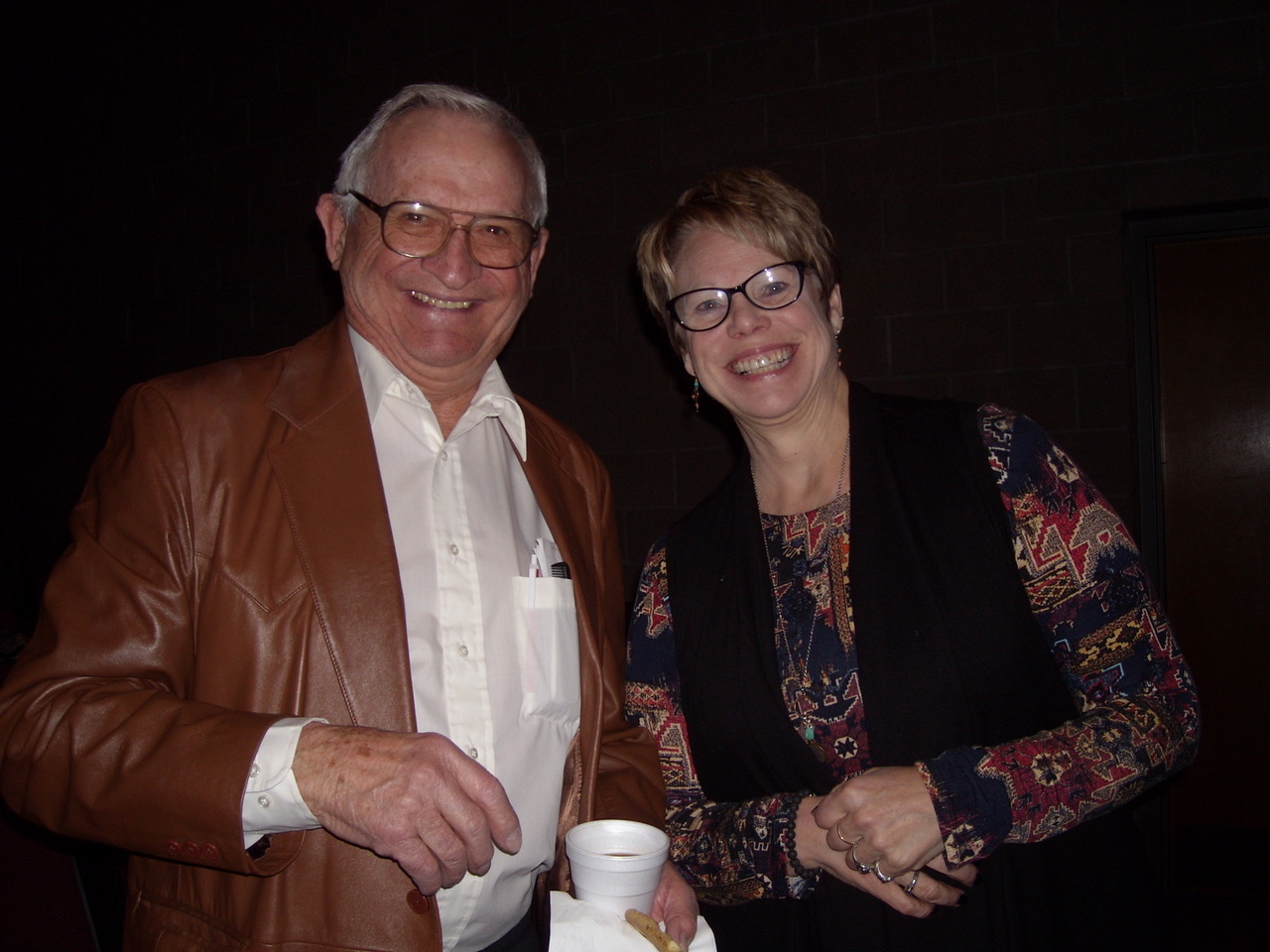 HOT SPRINGS -- “I grew up in a Hoar house,” said Darrell Hoar, “and I’ve had a lot of fun with my name over the years.”

In a most entertaining talk during the 14th annual Fall River County History Conference in Hot Springs this past Saturday, Jan. 19 at the Mueller Civic Center, Hoar told that his dad and brothers would put their dress clothes in a gunny sack, tie it on the back of the saddle and ride 12 miles to Ardmore to go to dances. After they delivered their horses to the livery stable they put on their dance clothes. They’d reverse the actions after the dance, timing their leave to they could get home to do chores and be at the breakfast table, ready to work.

Hoar told of his dad raising and selling horses and mules to the remount section at Ft. Robinson, Neb. He mentioned the K-9s that were trained at the fort and how impressed he was by the fort and all of the goings-on down there when he visited with his dad.

He spoke about growing up near Provo and the life of a country kid. He said they looked forward to butchering time when their dad was save the bladder from the animal and blow it up and that was their first exposure to a balloon. At age eight, he had his own team of horses and one of his jobs was hauling water to the house in two 55-gallon drums on a stone boat. He said the water was used several times before it was finally thrown out and then it was put on the flowerbed.

Hoar credits 4-H for much of his success, particularly in the areas of public speaking and livestock judging. He went on to become a cattle buyer for various commercial packers over more than 50 years. He “retired” several years ago but is still a cattle buyer for selected entities. Hoar frequently shows up at the Fall River Feedyard, the largest feedlot in South Dakota located near Hot Springs.

Also at the History Conference, Linda Starbuck, a Black Hills resident, gave a presentation on Laura Ingalls Wilder and Wilder’s connections to the Black Hills. Laura’s sister Carrie got involved with the newspaper business.  She worked in Colorado and Wyoming, then homesteaded in a claim shack at Phillip in 1907-1908 when she proved up. She got acquainted with Edward Senn who owned several South Dakota newspapers and he sent her to various jobs, the “Pedro Bugle”, then the “Roseland Review.” In 1911 Senn assigned her to manage the “Keystone Recorder” and in 1912, the “Hill City Star.” She met and later married, David Swanzey a widower with two children, from Keystone. They honeymooned in Hot Springs. Laura Ingalls Wilder and her husband Almonzo visited Carrie three times in Keystone. Mary, her blind sister, lived with Carrie in her last years, and is buried in Keystone.

Other presenters were Franklin Manke of Edgemont, who enumerated the achievements of several local rodeo athletes, many of whom were present in the audience. Also from Edgemont, Darrell DuToit gave us an overview of the timespan from the covered wagon era to walking on the moon. Dawn Johnson gave an overview of the 1918 Spanish Influenza epidemic. She appeared in a Red Cross apron fashioned after clothing of that era. Local Hot Springs stonemason Uriah Luallin regaled the audience with the story of the Odell quarry and the town of Odell, along with photos of the stone enterprise. Luallin noted that the population of Hot Springs is the same now as it was in 1893.

The director of the 1881 Courthouse Museum at Custer, Gary Enright, who has a background in broadcasting, gave us insights into Libbie Custer’s writings and her thoughts on her husband, General Custer. When they married she declared she would go along wherever the US Army sent him and she was able join him at the Army posts, though not on his excursions. After he was killed she spent the rest of her life trying to bolster his reputation.

Pioneer Museum/ Fall River County Historical Society board president, Carol Sides, showed photos of some of the many changes and improvements at the Pioneer Museum this past year. Local retired veterinarian, Paul Wittenburg, donated several pieces of vet equipment. The new owner of the Morris Grand Gallery, KC Carruthers, donated much welcomed display cases. During the 2018 season visitors from 10 countries enjoyed touring the museum bringing total visitation to 3,400 individuals. The museum requires many volunteers in addition to the board. Desk attendants serve 4-hour shifts, from 9 am to 1 pm, and 1pm until close at 5. Last year they put in 952 hours at the desk, greeting visitors, taking admissions and answering museum questions as well as general tourism inquiries. Whether a person has lived here for years or is new to the area, and interested in learning local history, the Pioneer Museum would welcome more volunteers.