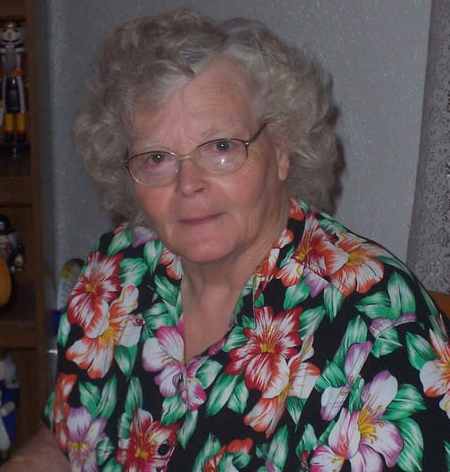 Audrey was born April 2, 1931, to Glen and Vivian (Mohler) Fugier in rural Buffalo Gap. She attended country school through third grade, Buffalo Gap school through her sophomore grade and graduated from Hot Springs High School and attended Chadron State College where she obtained her teaching certificate and became a teacher at a one room school house. On February 25, 1950, Audrey married Avon Shaw.  Together they had four children; three daughters and one son.

She was a member of the Prairie View United Methodist Church and long time member of UMW. Audrey was also a life time member of the American Legion Auxiliary serving as District President for one year and oversaw the poppy shipment for many years. She spent many days at the VA handing out hygiene items and clothing that was donated by the many Auxiliary units in the State. Her memberships included many years as a 4-H leader and Fall River County Extension Clubs.She thoroughly enjoyed her friendships in Bunco and tops.

Audrey was a wonderful baker and was well known for her popcorn balls at Halloween.  One year her son thought he would get her a recipe for a Christmas tea ring but Audrey was having nothing to do with that.  Instead she took a little of this, some of that and about this much of the other, stirred it up and she created her own tea ring receipt that won her many a rosette over the years.  She used no cookbook, no measuring spoons and amazed her son at how delicious they were.  Over the years she enjoyed cooking at the Oelrichs School (where all came to love her homemade baked buns) the State Game Lodge, a supermarket deli in Hot Springs and the Oelrichs Senior Meals.

One of Audrey’s passions was music. She could play the piano by ear and ensured her four children each learned to play an instrument. Flowers, babies, calves and a golden field of wheat swaying in the breeze would make her smile. She would be the first to spot a wild animal a half mile or more away.  She loved all of her family and extended family. She had the biggest heart and would do anything she could for those around her.

Arrangements have been placed in the care of Chamberlain McColley’s Funeral Home, Hot Springs.