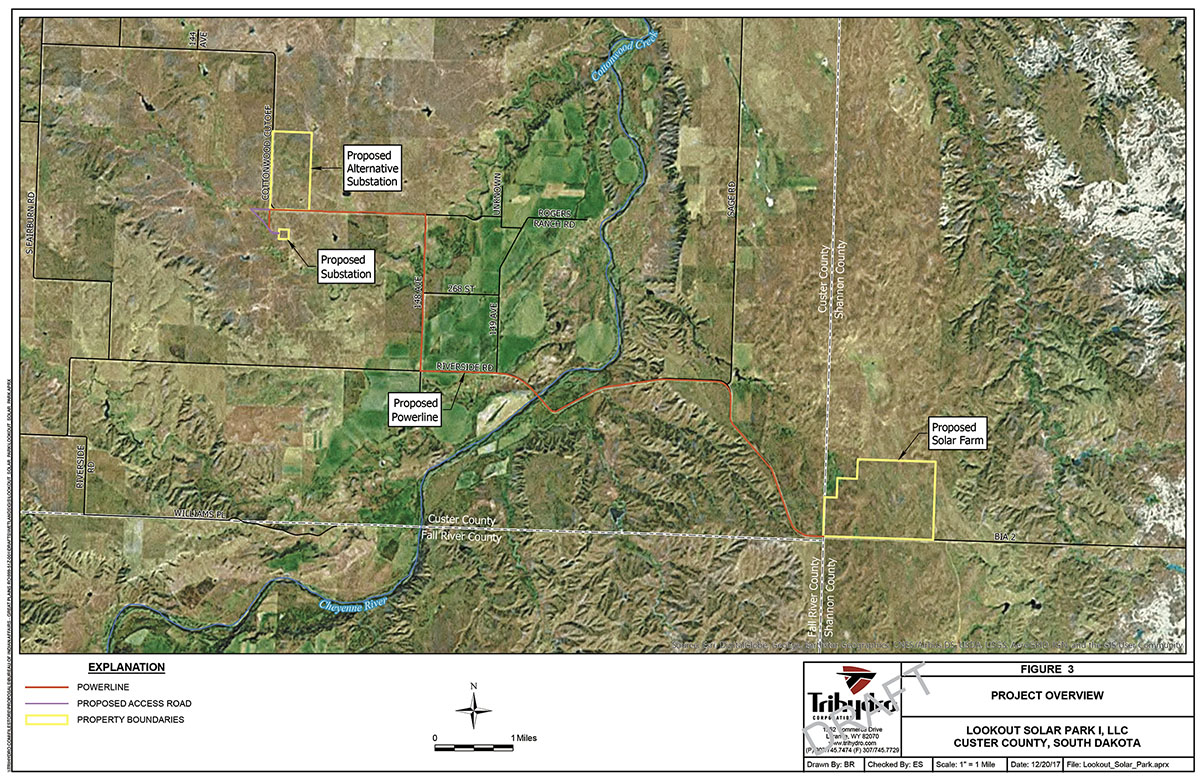 PHOTO CUTLINE: The Lookout Solar project shown above includes a solar farm (outlined in yellow) located on individually-owned tribal lands in Oglala Lakota County near the Custer and Fall River County borders, 22 miles east of Buffalo Gap (town not shown on map). An underground transmission line (in red) would then be constucted along Riverside Road in Custer County with a Substation further northwest near Cottonwood Cutoff.

HOT SPRINGS – A little over a dozen people attended a Public Scoping Meeting last week at the Hot Springs Public Library, which was held to field questions and concerns about a proposed solar project in nearby Oglala Lakota and Custer Counties.

The session was hosted by Christina Gomer with the Western Area Power Administration (WAPA) based in Billings, Mont., and Shani Harmon with the international law firm Orrick, Herrington & Sutcliffe, LLP, who represents Lookout Solar, LLC, which is the company proposing the construction of the project.

In Harmon’s summary during last week’s meeting, and based on additional information available at the WAPA website, the solar project would involve construction of an 840-acre photovoltaic solar generating facility which will also include a new substation, a new underground transmission line, access roads, and a maintenance and operation center.

Located approximately 22 miles east of Buffalo Gap, the solar farm is on individually-owned Indian trust land on the Pine Ridge Reservation in Oglala Lakota County but will border Custer County where it meets Fall River County.

The project would interconnect with WAPA’s existing New Underwood to Wayside 230kV transmission line, which is why, according to Gomer, the federal agency was involved with holding the scoping meetings as part of a Environmental Assessment process.

The Pierre Capital Journal last month reported on the Lookout Solar project after the company had filed an application with the South Dakota Public Utilities on Dec. 17, 2018. In the story, it described the exact location of the solar farm as Township 41 North (T41N), Range 48 West (R48W), Section 36 and the southern portion of Section 35.

From the solar farm in Oglala Lakota County, an underground transmission line would then be constructed in Custer County and follow the existing right-of-way Riverside Road until it turns and travels north along 148 Avenue and then to the west, where a proposed 230kV substation will be on 10 acres of private land located near Cottonwood Cutoff on Section 14 (parcel 003478) in T6S, R8E or in Section 11 (parcel 0034688) in T6S, R8E.

The company estimates the solar project to include up to 500,000 solar panels and would cost approximately $100 million, though project costs could fluctuate as much as 20 percent, the Capital Journal article stated.

Gomer said last week’s meeting will be the final public input meeting held by WAPA about the project but that another meeting is being hosted by PUC in Hermosa on Feb. 6 from 5:30 – 7:30 p.m.

The very first meeting hosted by WAPA was held in early December but fell on the same day as the “Day of Mourning” for the passing of former President George Bush, which prevented her from attending. Harmon did attend that meeting, also at the Hot Springs Public Library, and said a similar amount of people took part, many of whom were the same people.

While two hours were allotted for the Jan. 16 meeting, discussion took only about a half hour with very little input from the audience. The only real point of discussion brought forth was concern over the buried depth of the transmission line, which Harmon said would be a minimum of two feet but deeper in some areas, especially around the Cheyenne River and Angostura Irrigation District.

Fall River County Highway Superintendent Randy Seiler said he felt two feet would not be deep enough in many other areas and expressed concern about it needing to be buried deeper along the county road right-of-ways to prevent equipment from making contact with the lines.

Gomer and Harmon made note of his comments and added that they would be discussing the topic in the future with the Custer County Commissioners to get their feedback on that topic as well.

The Comment Period on the project will remain open until approximately Feb. 19. Gomer said it then takes about six months then to publish a Draft EA which would put into place an additional 30 day comment period for the public to review before a final report is published.

Comments may submitted at www.wapa.gov by searching for the Lookout Solar project. You may also contact Gomer by email at This email address is being protected from spambots. You need JavaScript enabled to view it. or calling 406-255-2811.